Like so many, I am appalled at the destruction of people and property, and the suppression of ideas, that occurred at the Charlie Hebdo offices in Paris on the 7th of January, 2015. Unlike so many, I cannot accept that the attacks "had nothing to do with religion", a view expressed by a French Muslim today on NPR's Morning Edition. The attacks were carried out by religious extremists for religious reasons. That is, of course, not to suggest that the majority of Muslims condone extremist violence, any more than the majority of Christians, Jews, Hindus or Buddhists condone violence. It is to say that religion, when believed literally, is a powerful and dangerous motivator.

Religion is only dangerous when it is believed.

I also cannot agree with the decision of many news organizations to refrain from publishing the Charlie Hebdo cartoons that are said to spark the violence. The cartoons are not, and never were, the issue. The issue is whether freedom of speech trumps religious sensibilities. It simply must do so.

Freedom of speech is a cornerstone of all freedoms in that it allows, and encourages, civil discourse. We accept the risk that it may sometimes cause offense because the benefits strongly outweigh the detriments. Freedom of speech is even more important than freedom of religion in that free speech allows for free expression in religious and other contexts. It is, in fact, only in a climate of free speech that religious tolerance can thrive.

Freedom of speech is more important than the fear of giving offense to others in that there is no end to what may, in some sense, cause offense. I choose not to be stifled by a few fanatics - even if they arm themselves and perpetrate violence.

For those reasons, I have decided to join a few brave (and mostly online) news organizations in republishing one of the Charlie Hebdo cartoons. I do not intend to cause offense. I do intend to stand for the one principle that underlies pluralistic society for the benefit of all.

The cartoon below is entitled "If Mohammed returned" and features the prophet being beheaded by a Muslim extremist. Mohammed is saying, "I am the prophet, fool!". The extremist responds, "Shut up, infidel!". I can think of no more poignant satire of the Charlie Hebdo tragedy than that. 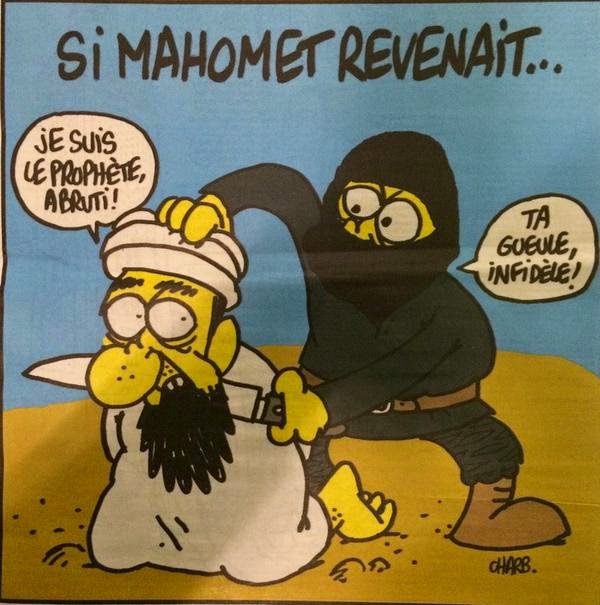 Email ThisBlogThis!Share to TwitterShare to FacebookShare to Pinterest
Labels: freedom of speech, philosophy