The US Transportation and Security Administration (TSA) has finally upset me. I've been giving them a lot of slack in recent years because I know it is hard to do what they do and harder still to do it within a huge bureaucracy. Recent events have caused me to reconsider my good behavior.

A couple of months ago I accidently left a tiny Leatherman Squirt on my key ring when I went to Dulles Airport near DC. It was my mistake and I fully expected it to be taken by security (even though the cutting blade is no larger than the file on a set of nail clippers and therefore no conceivable threat to anyone's life). I gave it to the TSA agent on the other side of the metal detector. He looked at it, smiled and put it into his own pocket. It was obvious that he intended to keep it.

Last week I flew to New York State for a meeting. I had my iPod in my only bag, which I carried on. On my way through airport security in Ithaca, a TSA agent told me that my bag would would need additional search. She searched it all right, and stole my iPod at the same time.

I understand that it is hard to find good, honest people to do a job like that. Maybe that should tell us something about the way we attempt to provide "security". Quis custodiet ipsos custodes?
Posted by Unknown at 10:29 AM No comments:

My friend Chris sends this update from a super-secret R&D lab:

"As many of you know by now, the Army has adopted the Advanced Combat Uniform (ACU). The ACU is the most advanced digital camouflage uniform in the world. It is the result of millions of dollars and thousands of hours or research in the Army's newest, state of the art, camouflage testing facility. While the exact location of the facility is still secret, we can now reveal the first ever photograph from inside this facility." 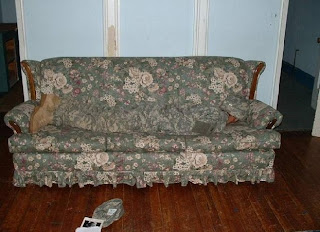 Now that GRDDL is a W3C Candidate Recommendation, it is high time to (finally!) have a machine-understandable home page! Mine now returns 49 embedded triples according to the online Redland parser.
Posted by Unknown at 12:28 AM 2 comments:

Email ThisBlogThis!Share to TwitterShare to FacebookShare to Pinterest
Labels: GRDDL

Semantic Tagging in my Home

I was planning to blog (one day...) about my daughter's tagging of items in my house, but Weeble beat me to it.
Posted by Unknown at 10:14 AM No comments:

Science and Religion: The Short Course

OK, here I go again. This one will generate some comments. I have finally figured out why science and religion (of any form) are natural enemies.

Science has determined that the universe is going to end eventually, either in a "Big Crunch" or in an ever expanding heat death. If I understand the current physics correctly (I do not, but may have a handle on the summaries), the odds seem to be in favor of an expanding universe piddling away the last of its energy in heat death. To summarize the findings of cosmology, there is nothing that we are going to do to stop that. Not on Earth, not in space, not in the future, no way, no how. We are along for the ride.

Even in the short term, science informs us that life on Earth could end abruptly from an asteroid, or via a passing star in some millions of years. Of course it will end eventually, upon the expansion of our sun past the orbit of our planet as part of its natural life cycle.

Science also informs us that we are driven to preen, to prepare, to want, to enjoy sex, purely for the reason that our ancestors survived better than their peers having those traits. Eat, survive, reproduce. That is all life has ever been about.

That view of the universe is less than uplifting for some readers.

Religion, on the other hand, asks us to believe in a mythology for the sakes of making ourselves feel better about the fate of the universe. The role of any mythology, to paraphrase Joseph Campbell again, is to put oneself in accord with the universe. That means to weather the fears of childhood and the hormonal storms of adolescence without self distruction and, at the other end of life, to accept death gracefully. How are we supposed to do those things, ask believers, when science tells us that life is ultimately meaningless?

I propose a new meme for the new century. Let's see the beauty of the universe for what it is. It really is an incredible place. Let's revel in it, for it is what it is and we, small and fragile, are who we are. We may try to change who or even what we are with our science, but we cannot finally escape the heat death of the universe itself. We are still along for the ride. We might as well care for each other. We might as well take care of our planet. We might as well make a heaven for ourselves, right here and right now, than to live in a hell of our own making.

Can science point us to a new morality? People have tried before and eugenics was the result. "Social Darwinism" was engendered by a scientific viewpoint, right? Yes, but I think we can do better this time. We can think the problem through, iterating the meme as we see fit. Consider some morality that might flow from scientific thought:Religion and science are natural enemies because they differ on the meaning of life. The success of science in predicting and explaining the workings of our universe suggest that we should start work on a means of answering those questions traditionally left to religion. How do we learn to accept our fate? How do we learn to enjoy the ride? It can be done. It is, after all, a very lovely universe to die in.
Posted by Unknown at 10:40 PM 7 comments:

Paul Miller of Talis interviewed me yesterday for a podcast about Mulgara. We covered the history, present and immediate future of Mulgara and its predecessors, Tucana and Kowari.
Posted by Unknown at 8:18 AM No comments: