Microsoft once supported RDF as a standard. What would the Semantic Web have looked like if the browser wars had not diverted that early enthusiasm? Here's the proof, a bag given to Eric Miller at the W3C in the early days of the standard development: 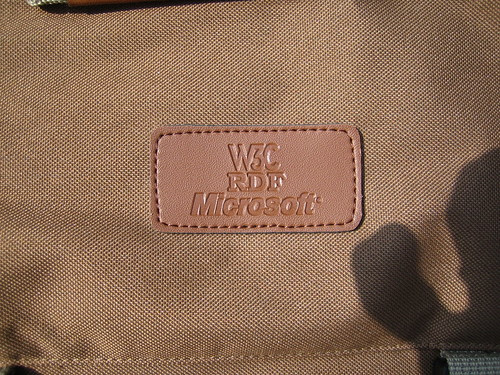 Posted by Unknown at 2:00 AM No comments:

I just returned from RailsConf 2006, the first official international Rails conference. It was a bust, sort of and great, sort of. First conferences are just hard to make right.

I like Rails and have spent about a month coding with it. That put me in advance of many of the sessions in terms of lessons learned. Still, all the right people were there and the conversations were worth while. The keynotes were pretty great. Unfortunately, it wasn't enough to keep me in Chicago past the middle of Day Two.

No Fluff, Just Stuff founder Jay Zimmerman helped organize the conference but did not assist in program selection. It might have been better if he did. Day One talks failed to impress me at all (with the notable exception of Adam Keys' talk entitled, "AC/DC, Stravinsky & Rails", which gets points for originality of thought). I poked at Adam during his talk a bit because he inadvertantly projected his notes beforehand and I read them off the screen. Sorry, Adam, if you are reading this. I couldn't help myself. You still got the laugh you were after, perhaps more so, so no harm done.

I only learned something really valuable in one session (Justin Gehtland's talk on Streamlined). Scott Raymond's Day Two talk on lessons learned from a Rails deployment was interesting, especially his concept that software development methodologies ignore the third leg of Vitruvius' Triangle, venustras, but that had little to do with Rails.

Martin Fowler, always an interesting speaker, gave a solid keynote on the first evening. He noted the failure of software systems to deliver every feature demanded (what I would call a "100% solution") and actively promoted smaller, more focused systems like Rails (which Martin labeled "postmodernist software"). It would seem that we have officially entered the era of opinionated software and have buried bloatware. The king is dead, long live the king! We certainly don't need another EJB in the world. Martin went on to opine that the combination of different patterns written in different speciality platforms will be important. Since Rails has yet to hit large enterprises, it will be interesting to see how this is handled in practice. There is room for both research and trial in that field!

Paul Graham gave the after-dinner keynote on Friday. It was interesting to see him in person. He was intense, smart and very, very worried. He was preparing his keynote while the band set up, stealing all the attention and making lots of noise. I took his picture, which he noticed. I told him, "I didn't take your picture because you are famous, I took it because you are famous, rich and successful and yet still look miserable." He complained about the band and opened his keynote with the story. That's my life - subtly influencing the rich and famous. It is a fun, if questionable, niche. Paul's keynote was entitled, "The Power of the Marginal" and suggested that innovation ceases once you become well known. It was well written and well presented, but sad. I felt like offering him a job afterward.

Why the Lucky Stiff and the Thirsty Cups played the first night. Why is brilliant, but insecure. He peppered his hard rock-'n-roll with Flash vignettes and obfuscated Ruby code. He has so much talent and seems to have built his sound effects devices himself. One of the attendees told me he once saw him recompile a Linux kernel device driver for his gear *during a concert*. That rocks, regardless of the music.
Posted by Unknown at 1:08 AM 2 comments:

Both routes and times on route were off. I can generally beat or match MapQuest times as it is. Perhaps the Google Maps time algorithm thinks I'm traveling with my wife and kids...
Posted by Unknown at 6:25 PM 2 comments:

Professor Jim Hendler, Director of the University of Maryland's MIND Lab where I work will be moving to RPI in the summer of 2007. The press release is here. Congratulations, Jim!

I will move on from the MINDSWAP project when Jim leaves.
Posted by Unknown at 9:59 AM No comments:

Secret of the Code

B and I saw The Da Vinci Code movie tonight. Unlike seemly most others, I thoroughly enjoyed it. But then, we had both read the book and therein lies the movie's secret.

Ron Howard is a very, very good director. The photography was superb and Tom Hanks and Audrey Tautou did solid jobs as the leads. Most criticism has stemmed from the inability to condense the weighty novel onto the big screen. My supposition is that they didn't really try.

The movie would be confusing and fragmented to those who had never read the book. Then again, over 45 million people have read the book. Isn't that a market in its own right? I suggest that the movie was aimed at the proven audience who had read the book, who understood it already and who would like to add Hollywood-style visuals and special effects to their experience of the story. That certainly worked for me.
Posted by Unknown at 11:24 PM No comments: