Tales from an Afghani Winter

My friend Chris, an Army Reserve lieutenant colonel, is currently serving in Afghanistan. He sent me email describing the situation there shortly after Vice President Cheney was targeted by a suicide bomber. It certainly sounds every bit as dangerous as we hear in the press, in spite of comments to the contrary. The bomb killed about 20 people.

"We've been getting lots of press due to the Vice President's visit and the suicide bomber.  Nobody covered the rocket strike last week.  My office actually looks toward the gate the suicide bomber hit yesterday.  There are many layers of security and blast walls etc, I was never in any danger.  I sit in a safe building looking at computer screens most days.  You do however, get good at the sounds of explosions here.  When our planes drop bombs it is a hollow woomp, then when EOD teams blow-up captured explosives, IEDs, etc., it is a muffled boom because they usually place the items in a disposal pit, but when you hear a sharp crack like yesterday you know it isn't good.  When I looked out my window and saw the local villagers running toward the gate I knew it wasn't the usual odd mortar or rocket.  We had a memorial for the victims early this morning before the coffins were taken to the plane.  The US soldier was from the unit in the same building as my office is in."
Posted by Unknown at 1:34 PM No comments:

Andrae Muys, Randall Swartz and Me

Andrae just pointed me toward a nice photo on Flikr from December 2006 at the Open Source Developers Conference in Melbourne, Australia. It was taken of Andrae Muys of Mulgara, Randall Swartz of Perl fame and me (left to right) in the Caulfield train station. 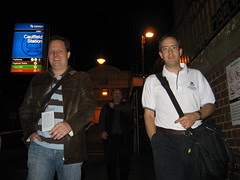 One of my students asked me how to replace text in an HTML table when links were clicked. I thought it was a useful technique once we worked it out, so here it is.

Unfortunately, Blogger won't let me insert Javascript so I can't show a running example on this site :P
Posted by Unknown at 2:40 PM 1 comment:

I was recently involved (peripherally) with a business partnership that broke up. The partners did not see eye-to-eye. Their lack of synchronization was not immediately apparent, but it became more so with time. Six months into their venture, they decided to part ways. That got me thinking about honesty, trust and models for those social dynamics. Specifically, I seem to recall that a natural clustering occurs between social entities that act honestly versus those who don't. Naturally, I hit the Web looking for answers.

It turns out to have been the great economist Adam Smith who observed that market interactions lead to "bourgeois social virtues" like honesty. Go figure. The quote is not from Smith (he did not use words like "bourgeois") but from Francis Fukuyama, whose paper at the IMF is referenced below.

Social models of trust seem to be based on incentives and costs (economic models). That approach has worked to a degree, although most economists will readily admit that it doesn't explain significant types of human behavior (e.g. Open Source Software). Not surprisingly, much of the academic literature focuses on either (a) describing trust systems based on costs and incentives or (b) suggesting incentives to make participants in a system more honest.

In the literature of evolution, there are many well-known examples of deception such as hidden ovulation in human women (unlike most other mammals) and uncertainty relating to paternity. There are strong reasons for such deception and so the ability to deceive is actually encoded in our genes! That sheds an interesting light on our social norms, doesn't it? I have come to think of social norms for honesty arising from incentives and costs, but being continued and expanded as a meme - an idea package in a Dawkinsian sense that takes on a life of its own.

There is an interesting paper on "social capital" (of which trust is an effect) and civil societies at the International Monetary Fund. It contains some useful definitions and references:

In anthropology, studies of the great apes have shown that their systems of behavior are similar to ours, but simpler. That provides a nice avenue for study. Rebecca Frank's work at UCLA made sense to me. She discusses social interactions of baboons, where coordination is valued to attain group goals so repeated deceptions become "unprofitable".

Come to think of it, I think I saw that kind of behavior on Animal Planet's Meerkat Manor show. One of the meerkats (Tosca, I think) was tossed out of the group for bearing young when she was not the dominate female. That was an unacceptable social interaction for which she was punished.

There are papers that demonstrate clustering of honest and dishonest people, such as Spatial Structure and the Evolution of Honest Cost-Free Signalling by Krakauer and Pagel. Interestingly, they suggest that islands of honesty can evolve even in situations where there is no cost and a net reward for deception.
Posted by Unknown at 4:08 PM 2 comments:

Professor Ernie Ackermann sent me a link to an excellent YouTube video today on Web 2.0. Michael Wesch, an assistant professor of cultural anthropology at Kansas State University, created it. Check it out. I plan to show this to my class, The Internet: Technology, Information and Issues. The video covers many of the ideas that we have discussed, including hyperlinking, the separation of content from presentation (HTML -> XML), standards, blogs, social interactions, the creation of the world's hive mind. Way cool and very nice work.

http://www.youtube.com/watch?v=6gmP4nk0EOE
Posted by Unknown at 3:49 PM No comments:

I have published some summary data for the 2006 Software Engineering Practices Survey. A journal article should follow shortly.
Posted by Unknown at 1:09 AM 1 comment:

I have commented before about the prevailing culture of extra-marital affairs prevalent in the military. Today's news brought an extreme example. NASA Astronaut and Navy captain Lisa Nowak, married with three children, became embroiled in a love triangle with another astronaut and an Air Force officer. She is now charged with attempted first-degree murder and other lesser offenses. Holy smoke. Learn to keep your pants on, people.
Posted by Unknown at 12:29 PM 3 comments:

Email ThisBlogThis!Share to TwitterShare to FacebookShare to Pinterest
Labels: far out, marriage, nasa

The Queensland, Australia state government has announced Project Vista to bring fiber to homes and businesses in Brisbane. Later they say they will provide it to a greater area of Southeast Queensland.

It will be interesting to see what they do without a "last mile" problem. They are asking academics in the region to suggest content and services to utilize all that bandwidth. Being Queensland, they naturally list gaming as a possible advantage.

Businesses are slated to get fiber as well as homes. That is a big change from the cable rollout, which paradoxically left businesses out. The possibilities for Voice Over IP for all local calls is interesting. Combine that with Metropolitan Wide Area Networks and watch the telcos scream!

I wonder how long it will be before Microsoft sues them over the name?
Posted by Unknown at 8:34 AM No comments: