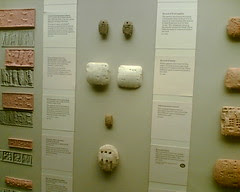 Girginakku
Originally uploaded by prototypo
I spent a good bit of 29 June at the British Museum in London. Those Brits really know how to loot! Attached is a picture of Mesopotamian girginakku from 5300 years ago. Girginakku were clay tags that were hung off of tablets or rolls to provide clues to their contents. They were originally used as tokens much like an IOU, but evolved into the world's first metadata.

The keepers of the markers ("rab girginakku") were the first metadata wranglers; the intellectual forebears of SemWebbers. Cool, eh?

On the right in the photo are bullae, clay envelopes containing girginakku, presumably to keep the girginakku from being tampered with before they were needed (sort of like a modern lead seal). Unfortunately, neither the girginakku nor the bullae were described in this detail or given their proper names on the descriptive cards near the artifacts. I only recognized them for what they were because I have recently been researching the history of metadata.
Posted by Unknown at 5:44 PM 1 comment: